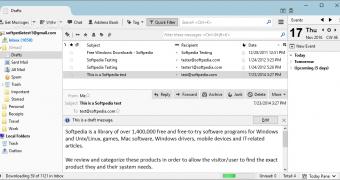 Mozilla has recently released a new update for its Thunderbird email client on all supported platforms, including Windows, Linux, and macOS.

With this new release, Thunderbird reaches version 60.5.2, and although the bigger changes take place on Windows, all users are recommended to update as soon as possible.

First and foremost, there’s one important refinement for Windows users. The Thunderbird team at Mozilla explains that in the previous builds of the email client, the application could crash when users tried to send an email to a specific recipient.

To reproduce the bug on an older version of Thunderbird, you can just head over to Send To > Mail Recipient, and the application should crash without any error message. Keep in mind that this behavior only happens on Windows, and Linux and macOS clients should work just fine.

Additionally, the new update resolves a bug that was introduced in Thunderbird… (read more)